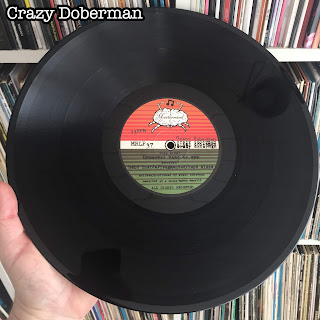 Crazy Doberman Crazy Doberman LP (Mastermind)
There’s been an absolute flurry of activity over the past few years from Midwestern collective Crazy Doberman – shows and tours to records, CD-rs, and tapes, tapes and more tapes. I’ve enjoyed all that I’ve experienced (both live and recorded), but it’s nice to settle into a thoughtfully-crafted full-length vinyl LP, which is exactly what this self-titled album is. Each side gets its own long sprawling cut, and together, it’s a fine demonstration of why this group is perhaps the hottest psycho-jazz act on the Instagram-meme scene. “Immortal Hand Or Eye” is the a-side and its notably nuanced for a group that is liable to come at you with a four-headed saxophone attack. It slowly arrives at dusk, a particularly dark-red sunset that forebodes calamity, finally climaxing with a flock of little Albert Aylers migrating for the winter. The b-side is somewhat split into three parts: “Held Inside / Fragmented / Kept Close”. It arrives with the clattering power of Amon Düül, but only for a moment before Crazy Dobe’ reassesses the situation with suspicious horns, loose percussion, skittering guitars and electronics and even a bass to maintain a sense of gravity. Some of their foggy lurking makes sense given their relation to the American Tapes / Hanson Records universe, but their application on this album isn’t noisy or harsh, and I appreciate that. They really stir the stew up for a while here, with each member of the tentet ensemble pulling their weight in pleasantly stimulating ways, collectively making a burbling, hazy and sinister form of music that a duo or trio could not. I look forward to their next album, and will probably have to dip into another live gig or limited release before then, too.
https://mastermindrec.com/
Top